Korean electronics and smartphone giant LG has launched two of its new flagship smartphones in India- LG Velvet Dual Screen and LG Wing. These flagship phones from LG makes it easier for everyone to multitask with their unique innovative designs and a revolutionary form factor.

Commenting on the launch of these new flagship phones Mr. Advait Vaidya, Business Head, Mobile Communications- LG Electronics India said, “Today’s smartphone users want and deserve more than cookie-cutter designs and tried-and-true features.” He further added, “Our newest launches, LG VELVET and LG Wing 5G are truly innovative devices that are different from anything else in the market today and offer features with unique propositions that are game-changers in the way smartphones are developed today. With more consumers watching content on their smartphones than ever before, the phones will create all kinds of new possibilities for multitasking and enjoying content.”

The LG Wing is a smartphone that comes with a strikingly new design where the secondary display to top swivels clockwise so that users can switch seamlessly between Basic Mode and Swivel Mode at any time to enjoy an expanded and truly differentiated user experience. The main screen rotates and hence in landscape mode to provide more space and usability to users. Users can choose to expand a single application to both screens or two applications can be displayed simultaneously, one on each display. LG Wing also comes with 5G, opening the door to a faster and more connected world. Despite having two screens, LG Wing is not that heavy weighing at just 260 grams and the swivel mechanism is robust and has been tested by LG to work perfectly even after 200000 swivels. 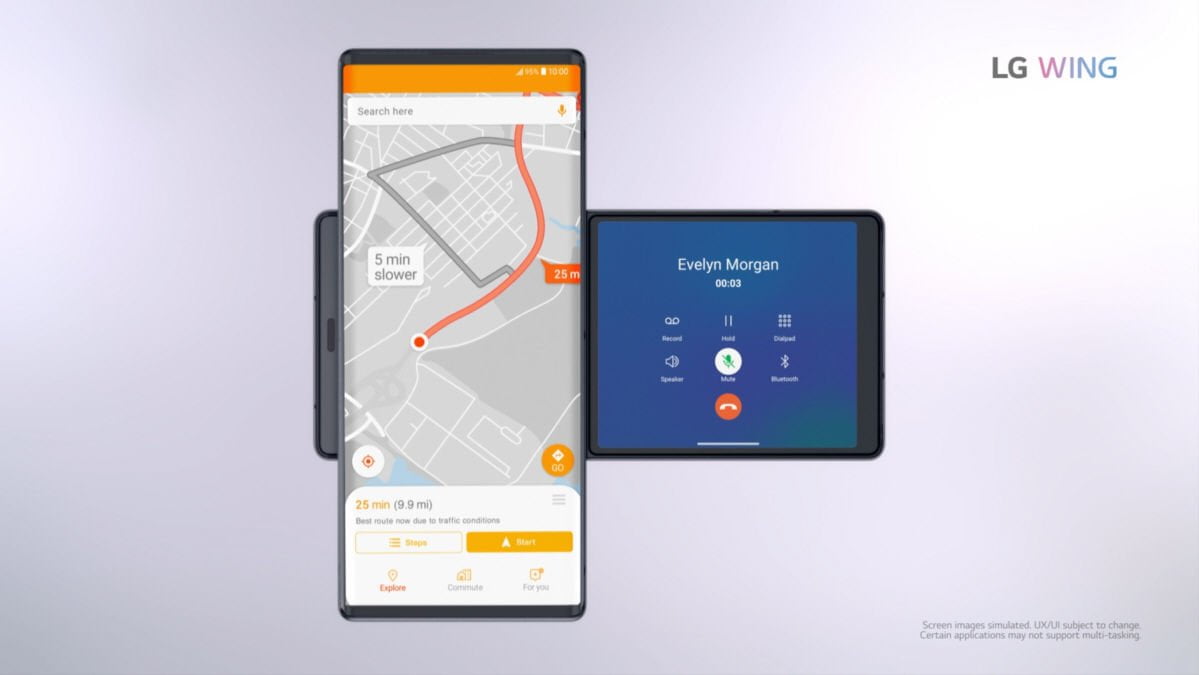 The LG Velvet is a perfect phone to maximize multitasking with an OLED Dual Screen that allows users to work, play & multi-task. With the Dual Screen feature, users can view and simultaneously work on multiple apps while also chatting with friends, playing mobile games, watching sports, posting pictures, shopping, and a lot more, all at one glance. With a free stop hinge, the phone allows users to fold it like a laptop, use it in stand mode or do a full 360° flip and place it in tent mode for a versatile viewing experience.

In terms of general hardware, both the phones stunning display, a multi-camera array on the back, and much more. The LG Wing is powered by Qualcomm Snapdragon 765G 5G and LG Velvet is powered by Qualcomm 845 mobile platform. Both the phones sport a 6.8-inch P-OLED Cinematic FullVision display. While the LG Wing sports a 3.9-inch secondary display the LG Velvet sports a huge 6.8-inch display to meet the needs of most consumers, who prefer multitasking the most. LG Wing has 8GB RAM and 128GB onboard storage, whereas LG Velvet has 6GB RAM and 128GB storage. However, both the phones offer a microSD card slot using which users can expand memory up to 2TB.

In terms of camera, LG Wing packs a triple-camera setup on the back. There is a 64MP main sensor with OIS, a 13MP Ultra-Wide lens with 117° FOV, and a 12MP Ultra-Wide lens with 120° FOV and pixel size of 1.4µm. On the front, there is a 32MP pop-up camera for video calls and selfies. LG Velvet packs a 48 MP primary camera with an f/1.8 aperture, an 8 MP ultrawide lens, and a 5 MP depth sensor. On the front, LG Velvet sports a 16 MP shooter.

LG Wing packs a 4000mAh battery whereas LG Velvet packs a slightly bigger 4300mAh battery. Both the phones run the latest Android 10 out of the box.

Both LG Wing and LG Velvet offer an advanced suite of imaging solutions through the LG Creator’s Kit that takes advantage of the phone’s 64MP & 48MP OIS main cameras and unique camera software. Timelapse Control further lets users adjust exactly how fast they want their videos to look, while ASMR Recording employs two high-sensitivity microphones to capture the faintest of sounds. Voice Bokeh minimizes background noise in videos to keep the focus on the subject.

LG Wing offers Dual Recording in Swivel Mode by using the 32MP pop-up camera and one of the phone’s rear cameras simultaneously. LG Wing users can use the second screen as a dedicated editing palette while the video or photo is displayed on the Main Screen. The Gimbal Motion Camera turns the LG Wing’s Second Screen into a convenient grip ensuring better stability and smooth video footage in horizontal mode. LG Wing also offers functions typically found only on a real gimbal. There are on-screen joystick-like control options for controlling the camera angle, a lock to reduce shakes and blurring, a follow mode for smoother videos when moving, pan follow for horizontal movement with minimal up and down shake, and first-person view mode for capturing rhythmic and dynamic movements.

With all these features, LG Wing is the perfect flagship phone for creators who want to push the limits on the move. Whereas, LG Velvet is aimed towards those who want serious multitasking capabilities. LG Velvet is priced at ₹36,990 for the single screen variant while the second screen can be bought as an accessory priced at ₹13,000. Customers can also purchase the LG Velvet bundle at ₹49,990. LG Wing is priced at ₹69,990. LG Velvet is now available for purchase starting today i.e. October 30, 2020 whereas LG Wing will go for sale starting November 9, 2020.